The calcium carbonate-rich deposits at Boxgrove preserve a wide range of faunal remains; the bones and teeth of animals which occupied the same lagoonal and grassland environments as the Boxgrove hominids. These bones allow us to reconstruct the palaeoecology of the site, to date it, and, where cutmarks are preserved on bone, to study the hunting and butchery behaviour of the Boxgrove hominids.

The fauna found at Boxgrove, at the level of the hominid finds, are consistant with a temperate interglacial climate. While there are many species currently found in northern Europe today, there are also species which currently live in Africa or that are now extinct. 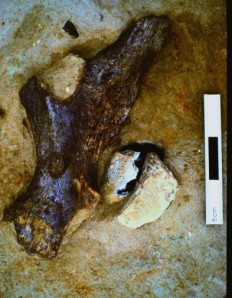 The rich herds of grazing mammals within the Boxgrove landscape would have presented an attractive resource to the hominids. The immature wet grassland and shrub habitat indicated at Boxgrove, formed as the lagoon dried out, would have provided an open area of good grazing in the otherwise forested interglacial environments of southern Britain. It seems reasonable to speculate that the concentration of game may have been one of the resons why the Boxgrove hominids originally chose the area. This is attested to by the butchered horse remains at site GTP17 and other butchered mammals including rhino at the hominid locality Q1/B.There is substantial interest surrounding the age of Boxgrove. The dating of the site is based on the first and last occurrence points of mammal species and evolutionary changes within mammal lineages. These methods rely on correlating variation in animal species across northern Europe, with the Pleistocene time-scale. Some species, particularly the giant deer, rhinos and various small mammal species, have become the chronological markers for dating sites. At Boxgrove, there is a distinctive group of mammals that occur together in a warm stage that immediately predates the Anglian glaciation. This warm period is dated to between 524,000 and 478,000 years ago.

One of the key species that allows us to date the site to this period is the water vole. These small rodents evolved changes that can be cross referenced and spatially and temporally compared. Most importantly, the teeth of the very early, pre-Boxgrove water voles have roots. Later in England and Europe, the water voles evolved so that their teeth became unrooted and continuously growing. These changes can be interpreted like divisions on a clock face, allowing us to use the ‘vole clock’ with confidence for the minimum age of the site at 478,000 years ago.

Many bones exhibit cutmarks from flint tools. These tend to be concentrated around major muscle attachments indicating the expert removal of limbs and other caracass elements. Cutmarks around the ear and gums of some individuals suggest that the tongue was removed as a prized source of protein. Marrow was also routinely extracted by the hominids using flint hammers and anvils to crack open the limb bones of large mammals so as to extract the fat rich food . Offal and lights would have been eaten alongside meat as important sources of nutrition.