The chalk cliff at Boxgrove provided a local and readily available source of high quality flint which was extensively exploited by hominids at the site. Throughout all geological units at Boxgrove we find flint tools and the waste flakes from their manufacture. Within the fine-grained sediments these waste flakes remain in-situ, preserving the arrangement of flakes left by knappers 500,000 years ago. In the picture on the right it is possible to observe the arrangement of the knapper’s legs, as he or she manufactured a biface at the site. 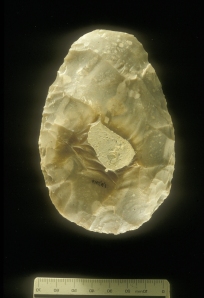 The excellent degree of preservation at the site has allowed the excavation of many such scatters. These are sometimes found in small clusters where a hominid group manufactured tools for use in the butchery of mammal carcasses. In the laboratory, we are able to piece the individual flint flakes from these scatters back together and rebuild the original nodule from which the knapper produced the tool. It is therefore often possible to identify the type and shape of the tool manufactured during these knapping events, even where it was subsequently removed from the site. We can do this by analysing the flakes for particular features which can tell us how it was removed and what the intended tool was likely to be. In addition it is sometimes possible to observe and cast the void left by the tool in refitted flake groups. 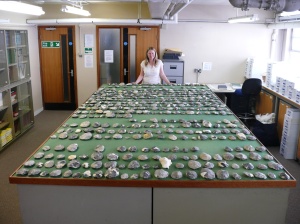 .
While simple flake tools such as endscrapers were made at the site, by far the most common tool-form was the biface. The biface is the defining tool of the Acheulean, a technology which developed in Africa around 1.6 million years ago (Homo ergaster) and continued to be used by Neanderthal groups in northern Europe 1.5 million years later. Bifaces are typically 80-150mm long, flaked on both faces and knapped to both maximise cutting edges and ergonomic qualities, while minimising overall thickness. At Boxgrove this is achieved by extensive thinning of the tools with the removal of long, fine flakes using a soft-hammer made of bone or antler. The Boxgrove bifaces are generally ovate in shape and are characterised by the removal of special sharpening flakes called ‘tranchets’ from their tip. Access to abundant fine-grained flint, the use of soft hammers and careful, competant workmanship by the Boxgrove hominids have combined to make Boxgrove bifaces some of the finest examples in the world. The Boxgrove bifaces appear to have been primarily used in the butchery of large mammals.